A couple of days ago, Dad, Jacob and I went down to Kintyre where some guys from the railroad were loading the rocks that they got from us onto a short train, and then hauling them out to the lake, where they dumped them by the tracks... The train had just dumped, and was heading back to the loading area, so we walked around for a little while until it got back.
After standing outside in the rain for about ten minutes, the train finally got back from the lake, and was ready to be re-loaded. After a brief consultation with the guy in charge, it was decided that we would be allowed to ride in the train out to the lake! Here are some pictures from our 'Train Ride.'
Steve, coming to talk to us: 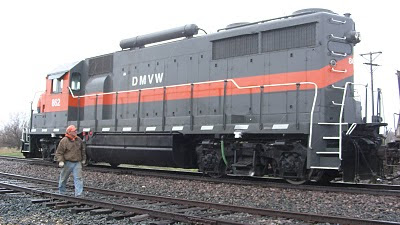 Dad and Jacob standing waiting for the verdict: 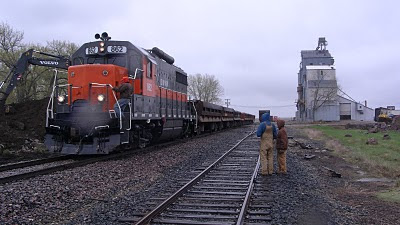 Inside the engine, looking out the front window: 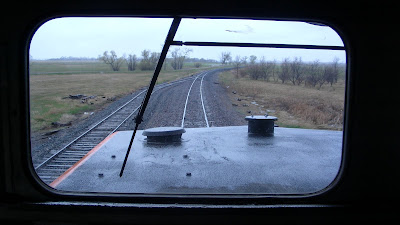 A view of the controls, sorry it's soo fuzzy: 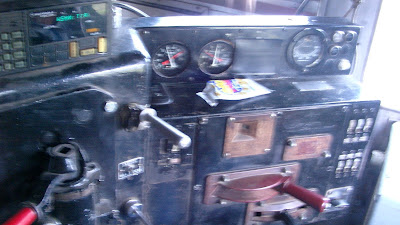 Looking out of another window: And, as I took along my camcorder, I thought I would share a couple of video clips:

Here is a little interview I did of Jacob, while we were waiting for the train to get loaded:

That was very interesting. I hadn't thought about how they were going to get the rocks out to where they needed them. Of course it would be on a train! Thanks for sharing the pics and videos. The children and I enjoyed viewing them.

Loved this interview with Jacob. I'll have to show it to the the rest of the family so that they can get to know Jacob a little too. Now Hristiyan wants to go watch your longer videos of RC racing, a subject I wasn't as interested in.
: ) Thanks for posting these, Andrew.