Well, I'm back. This probably isn't a surprise to most of you, as it has been posted on my other family members blogs, but I thought I would say it anyway...
Like I said in my last post, on Friday we were going way up North to look at a grain cleaning unit that was for sale up there. On the way up, we made a little detour into Minot to pick up a certain giveaway there: 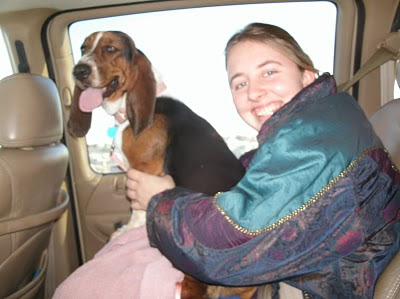 Cora has been wanting a Basset Hound for quite a while, and when she found one for giveaway on http://www.bismanonline.com/, she had to 'Pounce' on it. :-)
Here are some pictures of the grain cleaning unit that we went to look at: 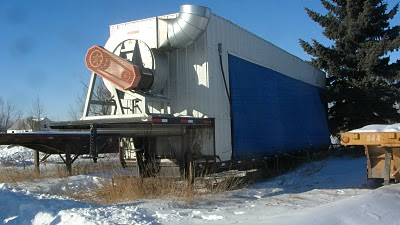 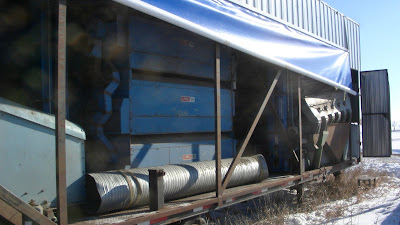 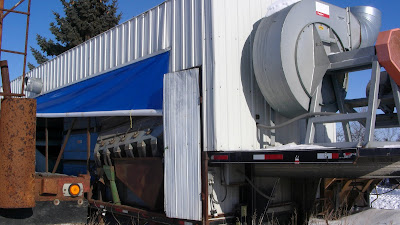 We spent over an hour looking at the cleaner, trying to decide if it was worth what the guy was asking for it, and if so, what we would all have to do to it in order to make it work with our operation... The verdict? Yes, it was in fairly good shape, and it didn't look like it would be too hard to get it going again, so we called the owner, and made a deal; we would be back up on Sunday to pick it up.
Now, seeing as it would only be about 10 miles out of the way for us to go visit some friends of ours up there, (Who we don't get to see very often, because of the 200 mile trip,) we were able to go visit them for an hour or so. Then we had to head for home... Correction: Then Dad, Cora and Jacob headed home. Seeing as we had to be in the area again on Sunday, I had the opportunity to stay with the Bartlett's for the whole weekend!
I had a very fun time at the Bartlett's. Friday evening we spent playing games; I taught them how to play Pit, and they taught me how to play Stratego. (Which I enjoyed so much, I made my own from cardboard as soon as I got home. :-) ) I don't have very many pictures from my time up there, but you can check out the Bartlett's blogs, as they posted a couple of me... They are linked to on my sidebar; ND Homekeeper, Adventures of a Turtle Mt. Hillbilly, Mr. Flatpicker, Out in the ND Boonies, and ND Wood Hauler.
Here are some pictures I took while I was out at chores with the Bartlett's:
The Bartlett's dog, Samson. 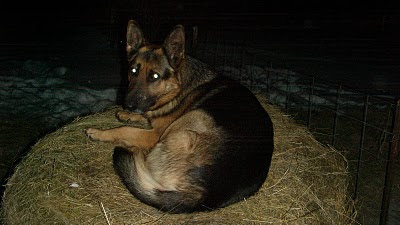 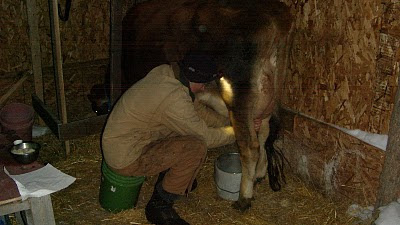 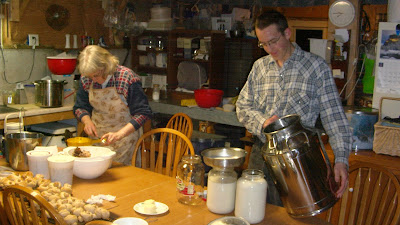 Dear Andrew,
I recall vividly when you were 2 years old and we were sitting in the mall. This elderly man came up to me, after watching you tear around for a few minutes and he said, "Yup, the second born child who's a boy." I said, "Excuse me?"
He went on to explain that he'd spent his years as a recruiter for the army. He said that they were taught especially to sign up 2nd born children who were boys. He said that these people were the best for going into battle as they were good thinkers and could analyze quickly what to do. Further, they were known to be the most fearless of humans. His words have made me wonder often what kind of work you would pursue as an adult.
Now that I've seen your grain cleaner and I ponder you going into business with this monstrosity of a rig, I have some very normal motherly trepida-tions. However, I know you Andrew. You've not shirked from one challange that God threw at you yet. I JUST KNOW THAT YOU'RE GOING TO DO WELL IN THIS BUSINESS!!! I AM SO PROUD OF YOU, MY SECOND BORN SON!!!!
Mom
PS. This is not to say that I am not proud of my other children, for I am. This is meant to be an encouragement to you as you take this huge leap of faith!