Well, I'm back!
I have been busy on the farm,
working in the fields,
and fixing the tractor, etc...
Now it's time to play!
Here is a picture of my new "Toy". 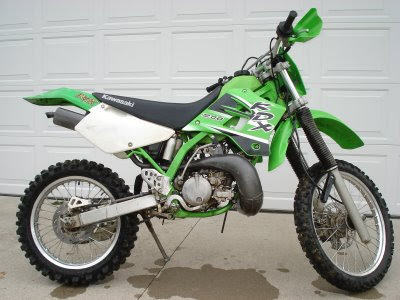 It is a 2002 Kawasaki KDX200. I just got it yesterday, so I haven't had much time to ride yet. I bought it from a guy in Fargo, but I picked it up in Eureka SD. How? I have an uncle who lives in Fargo, and he was coming down to Eureka anyway, and he was nice enough to bring it down for me! We were going to Eureka for my cousin's graduation anyway, so we didn't even have to make a special trip!
I took a ride on the bike before we loaded it up, and that's when these pictures were took: 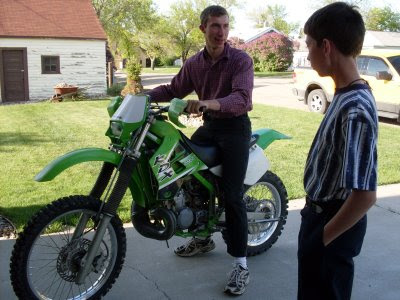 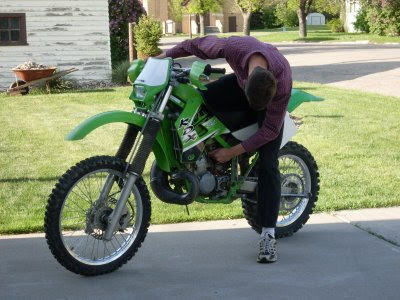 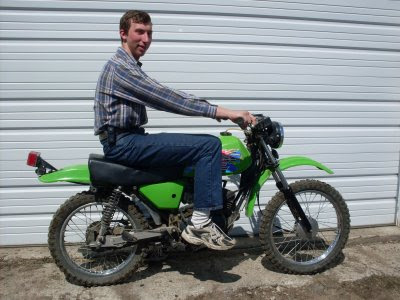 Cool! So, how's Jacob going to fit on the back when you drive up to Leeds? :-)

Nice bike! You missed a great weekend up here, I wish you guys could have made it up. I've got a few people that would like me to give them the short and simple version of the appleseed shoot so I thought I could invite you up if you want to be part of that. Email or call me sometime. Chris

Hi Andrew,
I, too, am so happy for you to have your dream bike now. It looks as though you shouldn't outgrow this one! :)
I hope that you and Jacob will be able to participate in a shoot one way or the other--AFTER THE GRADUATION!
Can you believe that it is TOMORROW already? You'll do great!!!!! We're all praying for you.
Love always,
Mom