We have had another busy week around here, but I guess that's kind of normal... :-) A good bit of our activity came about through the excellent website www.bismanonline.com, which is THE online classified ad website for the entire ND area, and reaching into the neighboring states and Canada as well!  Here is a brief overview of how it influenced our week:
Wednesday: I listed our 1985 Chevy Caprice Classic on BMO. About four hours later we received a phone call from somebody who wanted to buy it, if we could meet him in Bismarck.  SOLD!
Thursday: I listed my 2001 Dodge Stratus on BMO.  Got a call less than three hours later, the guy said he wanted it and was on his way to pick it up! SOLD! By the time he got here, I had already got two more calls on the car!   I also spent part of the day working on a computer for a guy who found out about me through BMO... :-)
Friday: Dad and I drove to Minot to pick up another project car. Yes, I did find it on BMO...  While on the road to Minot, I got a call from somebody interested in the '02 Dodge Intrepid I had listed on BMO, and wondering if I could meet him in Bismarck that evening. It worked out that Mom was able to bring the Intrepid to town, and then catch a ride home with us as we came back through Bismarck.  SOLD!   Friday morning, Cora hit a deer with her van on the way to work, so we will probably be selling that on BMO as well... :-) 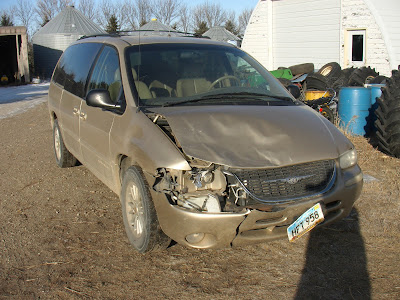 So, we sold three cars in three days -- not bad, eh?  I think that is our record for fastest sales though... :-)   I guess I need to get another one running, as we are kind of short on vehicles now!

Dear Andrew,
You are so wonderful to sell Cora's wreck for her! We are sooo blessed to have you in our family.
Mom