Hello all!
Yes, I am still alive! :-) No, my computer didn't die either! Unfortunately I have just had too many other things going on, and a number of more interesting projects to do in my spare time, so Blogging kind of got put on the back burner... And besides that, we have had things going on the last couple of Sabbaths as well, so I couldn't even write then!
This morning I decided to take some pictures of my "Other projects" to post on my blog, so without further ado, we'll start from the beginning...
A couple of weeks ago, Dad was hauling grain for a neighbor of ours, when he saw an old snowmobile and an old four-wheeler sitting in the tree rows... After talking to the owner a couple of days later, we were able to buy them for a pretty decent price. :-) They both needed some work, but to the pictures: 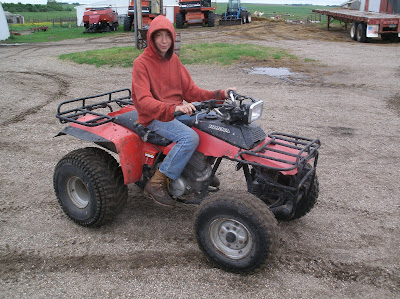 Here is Jacob happily driving the 1985 Honda TRX250! It runs good now, although the rear brakes still need to be fixed... It had 2 flat tires, needed a new hub for one of the rear wheels, had a broken front shock, the battery was missing, the front fenders are all broken and missing, the front brakes needed adjustment, the carb was out of adjustment, one front rim was cracked, and apart from a couple little odds and ends, it's just like new! ;-) It has already been up to the pasture for fencing, and sure is handy around the yard!
The snowmobile: 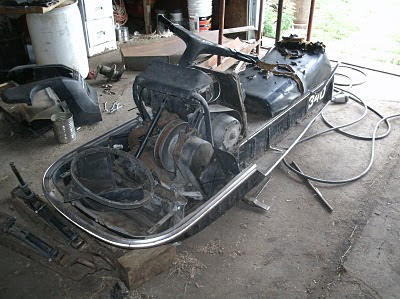 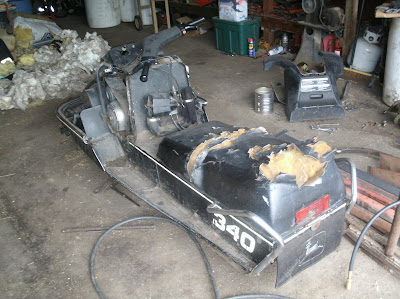 Yup, that's right. Its a John Deere! More specifically its a 1974 John Deere JDX-4 340cc Twin. As you can see, it's in rather tough shape cosmetically, but the motor runs good, and the track is in pretty good shape, so we should be able to get some fun out of it this winter... Right now it is sitting in the shop just as you see it, and probably will be for a while, as it isn't a really high priority right now... ;-)
Last Tuesday, Dad, Jacob and I went to the annual consignment auction in Napoleon. We brought home 3 things; A large (50ft) vibreshank (mainly for parts); A nice stock trailer (We really needed one, as we only had a little one before, and we are planning on hauling all the cows to pasture this year... another story :-) ); and this: 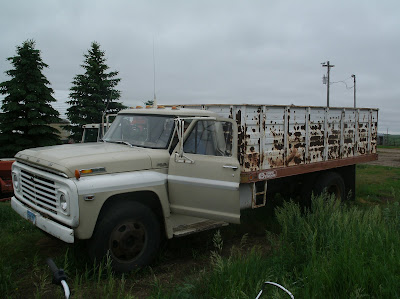 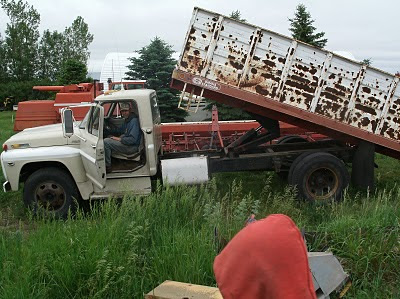 How old do you think this truck is? Leave me a comment with your guess!
My other project: 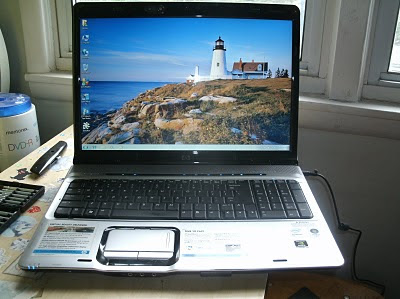 This laptop was given to me in need of repair... I was told it needed a new motherboard, and that it would cost ~$400! But to make a long story short, I was able to fix it, and only had to add RAM, and a hard drive! I have been wanting a good laptop for a long time, and now God has given me a ~$1500 laptop for less than $100! PTL!
And now for an announcement:
Prairie Days 2010 is coming up! Check out the website Here for more information! Come and join us! But, if you can't, stay posted for a whole bunch of pictures, and probably even some video clips... :-)
That's all for now,
Andrew B.
Posted by Unknown at 4:46 PM

Oh yes, and if you have a four-wheeler for summer you most definitely need a snowmobile for the winter- right?

Hmm, how old is that truck? I don't know. I clicked on the pic to make it bigger, but I noticed you wiped out the fine print :P or at least I think you did?
I might leave another comment with a guess if I think of one!

Wow! That is such a blessing that you were able to get that laptop!

Oh and no I don't think I'll be coming to Prairie Day's so I'll stay tuned for pics!

The truck must be around 60 years old?

Hey Andrew, I think blogger took my comment as being from Mom, when it was really me. :-) In case it didn't actually go through, here's the comment again: the truck must be around 60 years old?

I just rode in a 1987 chevy dump truck that looks a lot like yours so my guess that your new truck is as old as me since I was born in 1987!
~David

I think it's older than that David